As part of our plan to have a diverse farm one of the things that has really captured our imagination has been the prospect of growing grain. Since we started baking bread in the bakehouse here in Lampeter we have been very keen to see if it was possible to use more local and less imported flour. Not only is there the incredibly romantic notion of eating a loaf that was baked in Lampeter made using flour grown just up the road …. There is also the idea as to whether there is a place for such small scale production. Arable production, at least to me, feels very much the realm of big fields, big expensive machinery, huge silos, endless talk of yields. I think of those images from America of combine harvesters driving for days in fields that never end. And then there is what I propose …. Small fields, no kit, lots of hedges, lots of rain …. In my heart and I think I felt that the whole economies of scale argument is not really right for everything. I felt that there is something very interesting about growing something that is truly reflective of the region from where it is grown.

And so in 2014 we began the journey of producing cereals that we will mill in a region in which there is hardly anyone else who is trying to do the same! Growing organically the first challenge is managing weeds. How do we get what we want to grow, to grow, and not the stuff that we don’t. In a conventional setting you use some sort of chemical to kill the bad guys. So with that option not available to the ecological approach is to try to do everything you can to tip the balance in favour of our grain seed. For us this meant first sowing a brassica break. And so after the first ploughing of the field after grass, we sowed forage rape. This fast growing brassica is a big leafy beast of a thing. It grows really fast and tends to form big leaves quickly enough that it can choke off light to everything else that is growing. So the rape wins, the weeds lose. We then graze off this rape with sheep. Lambs grow to like the rape and they fatten quickly on it. Also having animals on the field allows us to use their manure to add more fertility to the field. After the sheep have grazed the crop down we move to ploughing again and sowing the grain seed. 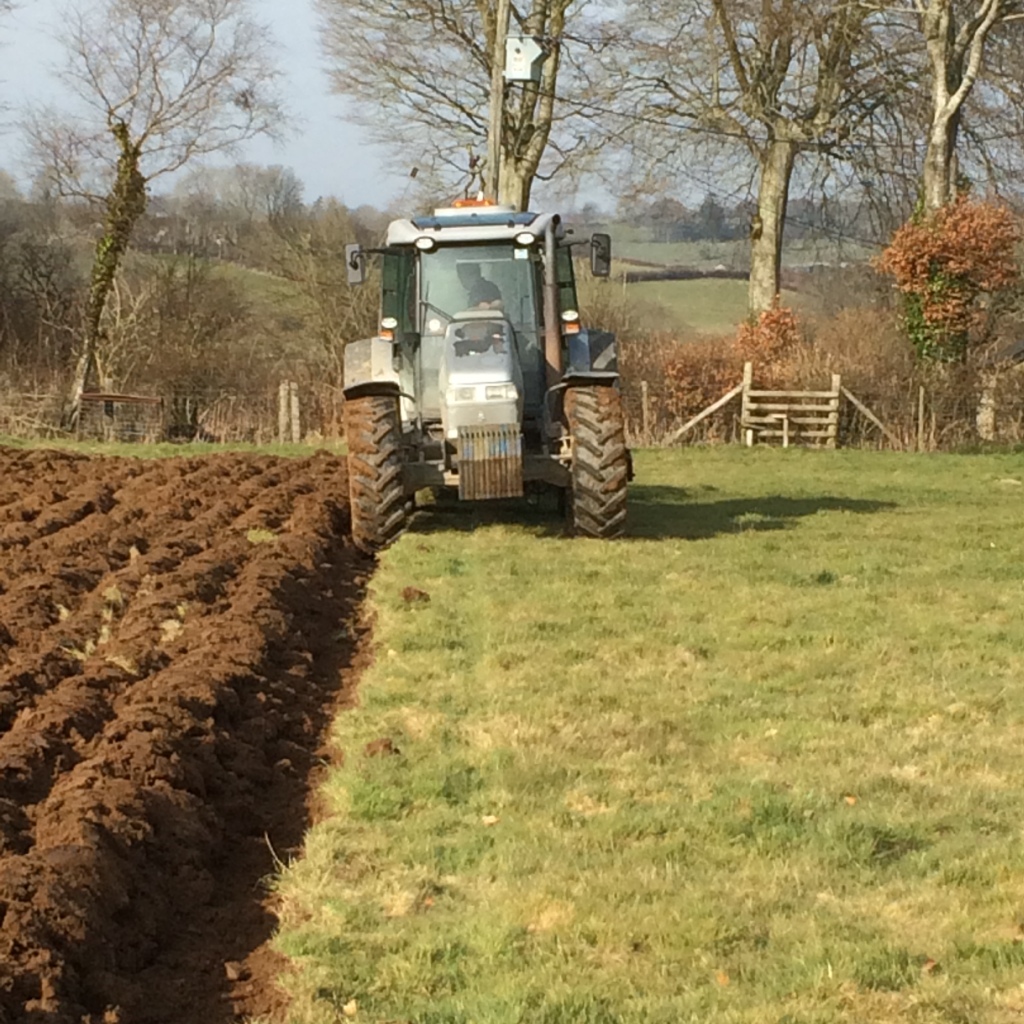 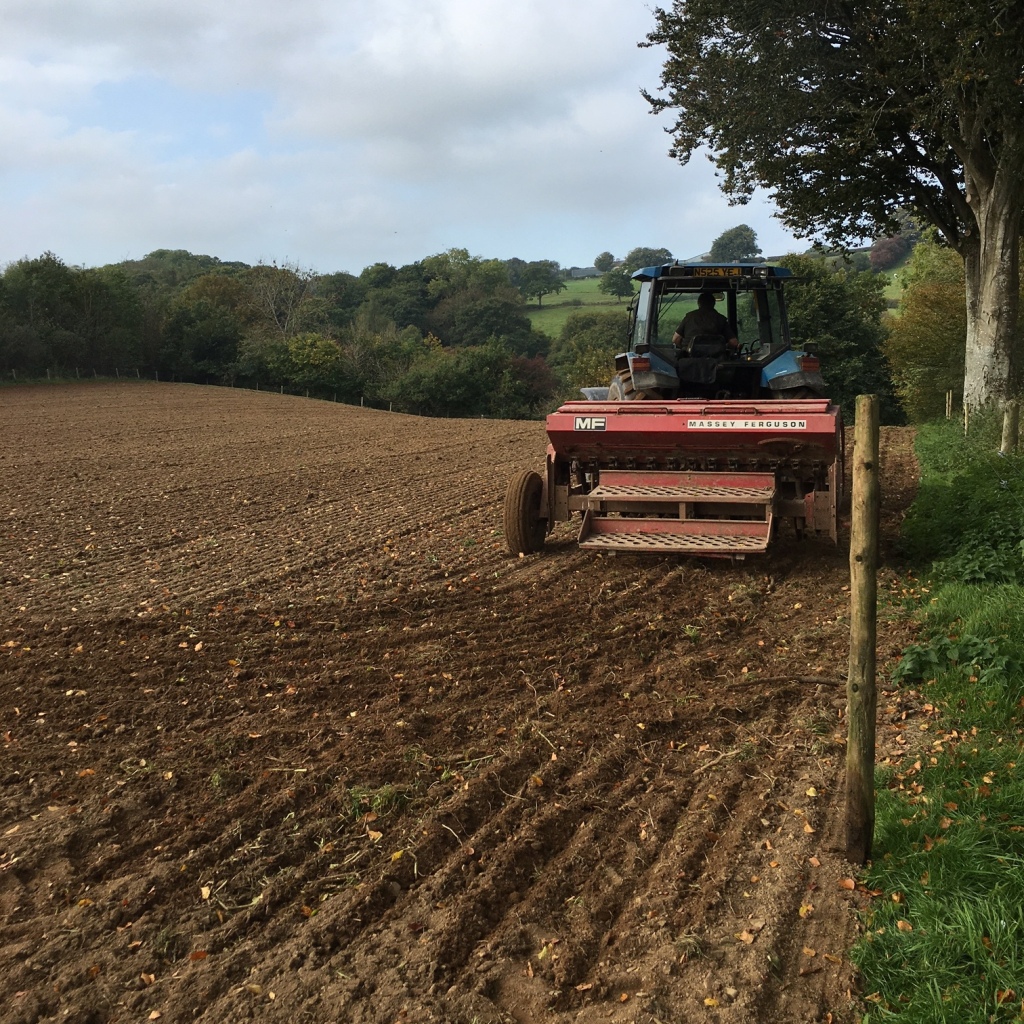 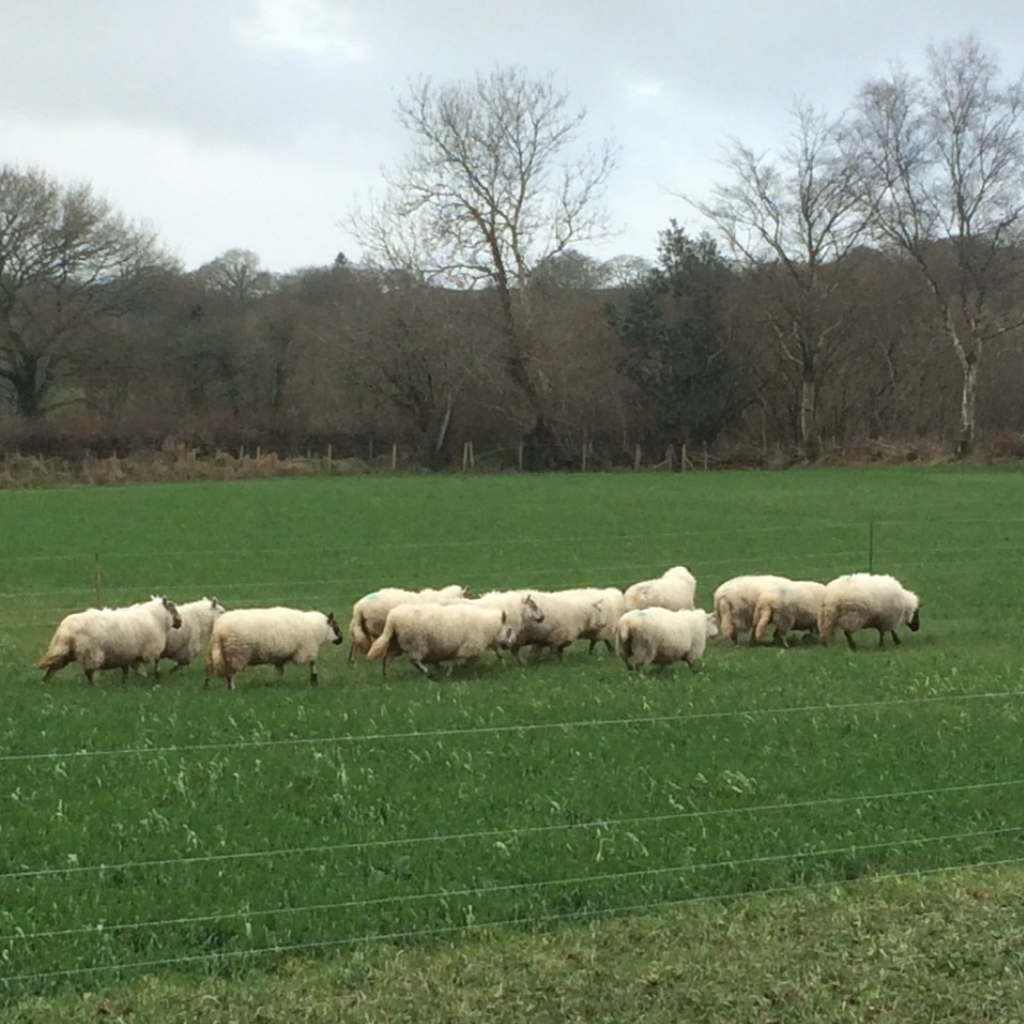 Next up – what grain to grow? So here the economies of scales argument rears its head again. Obviously I can’t compete on price with a product that is produced on a huge scale so our thinking was to steer clear of that. So wheat was ruled out immediately. So for us that leaves us with only two other cereals really – spelt and rye. Rye is used in most of our loaves for flavour. The baguettes, the country, the white batards …. All use small portions of rye. And then the spelt loaves use both wholemeal and a sifted ‘white’ spelt. We sourced Demeter certified seed from Lincolnshire and away we went. Using contractors again the seed was sown in late Autumn. Cereals can traditionally be winter or spring sown. For some cereal varieties though there is a need for the plant to go through a prolonged cold period if it is a head out and produce seed. For spelt this is certainly a requirement and that is why we sowed when we did. As the crop grows in late autumn sunshine to about six inches tall there is again a role for the sheep. One of the things people often worry about with overwintered cereals in a damp climate is the threat of fungal attack. So think tall, grassy plants, damp, foggy weather, not much air movement. So to combat that we use the sheep to graze down the crop. This does a few things. Firstly, reduces the green mass. More airflow, less prone to fungus. Secondly it provides something for the in lamb ewes to eat in the winter when there is not much grass around. And thirdly it scares the cereal crop. If you think of a plant, its destiny is to try and reproduce. For a rye or spelt plant that means growing a tall stem and then producing seed at the top. So when out ewes start eating it it thinks the end is near, that these pesky sheep are messing with its destiny. So now it puts every resource it can into making seed so sends up lots of shoots in an attempt to secure a future for its offspring! And for us it means a heavier crop – at least in theory. 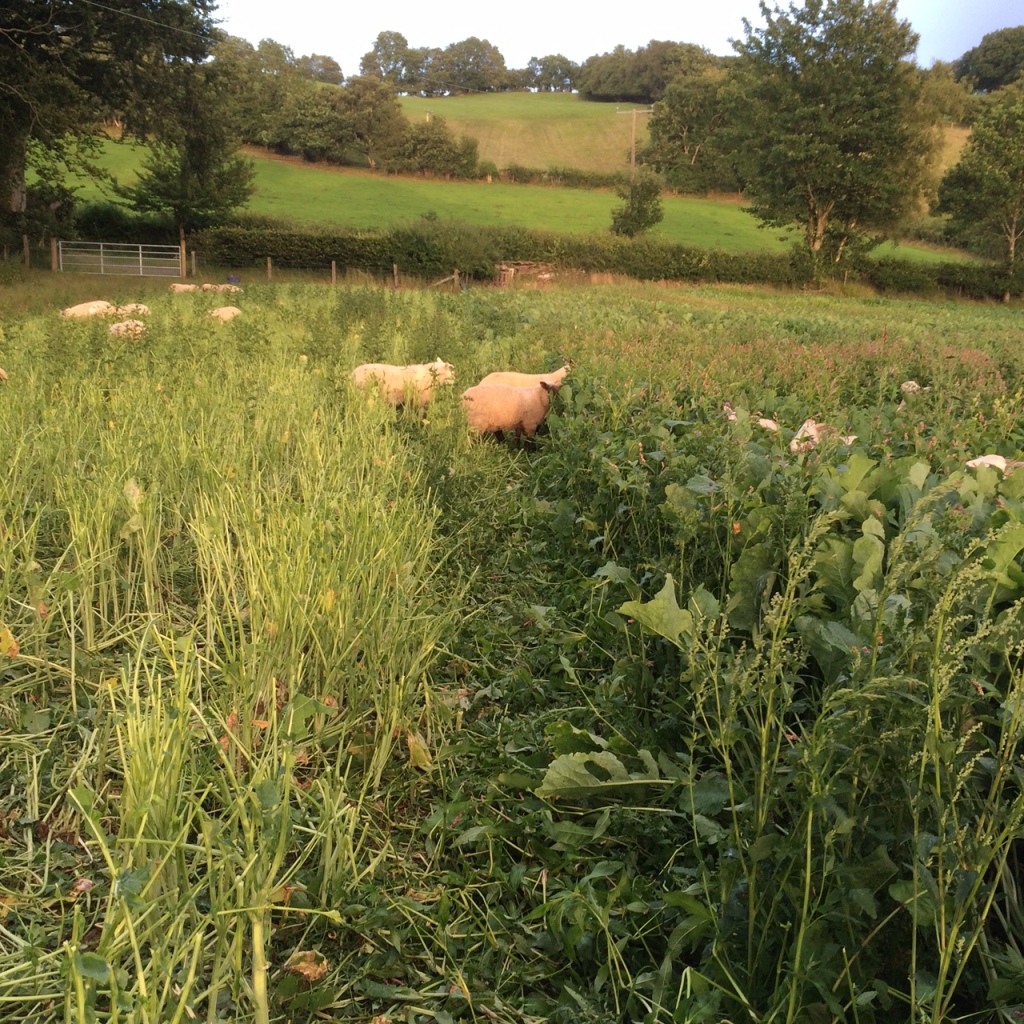 sheep grazing down the crop 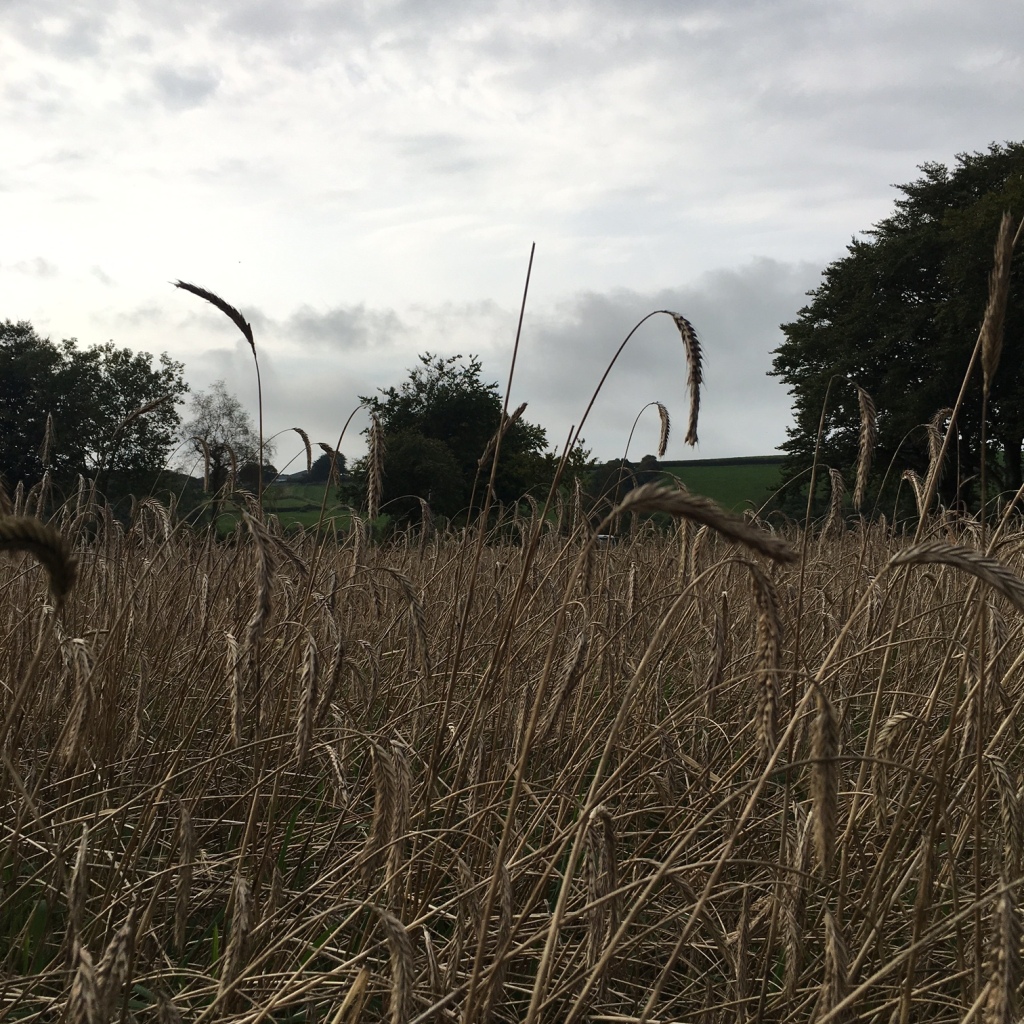 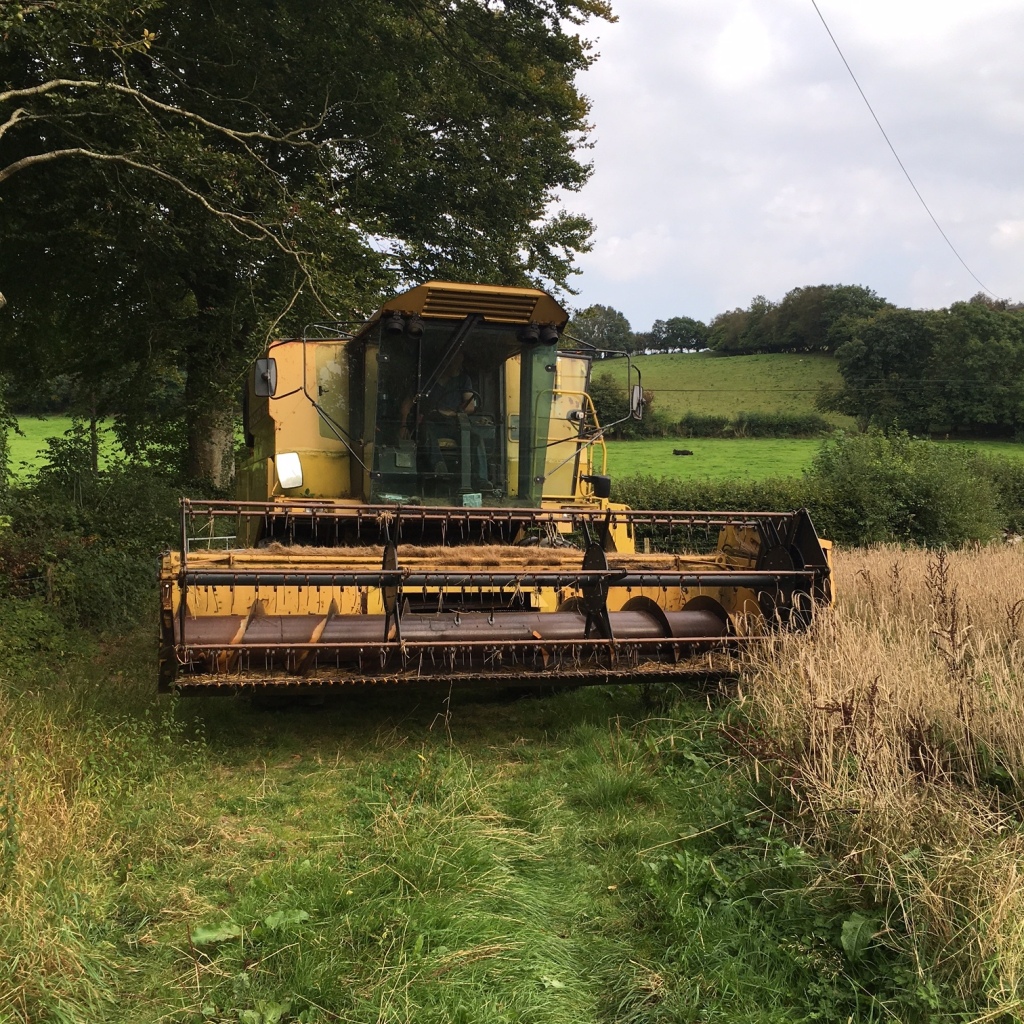 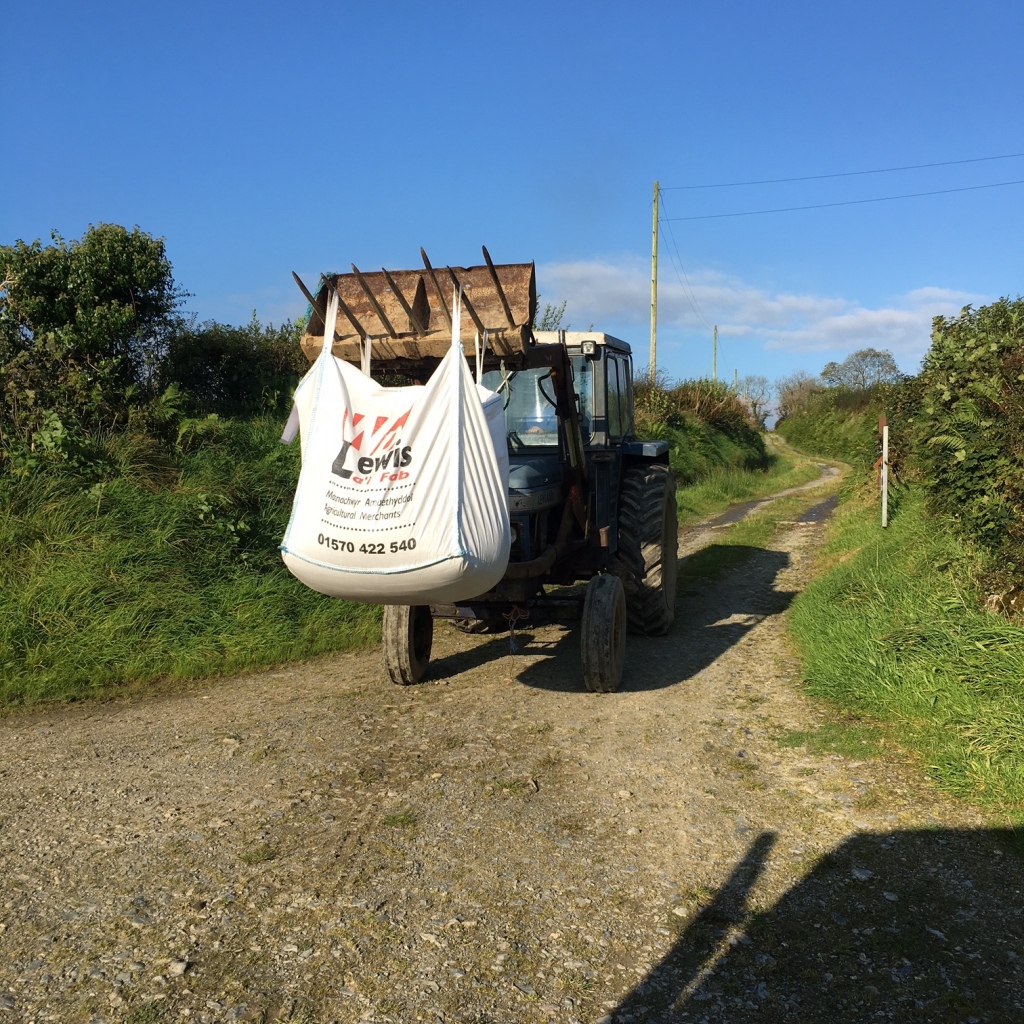 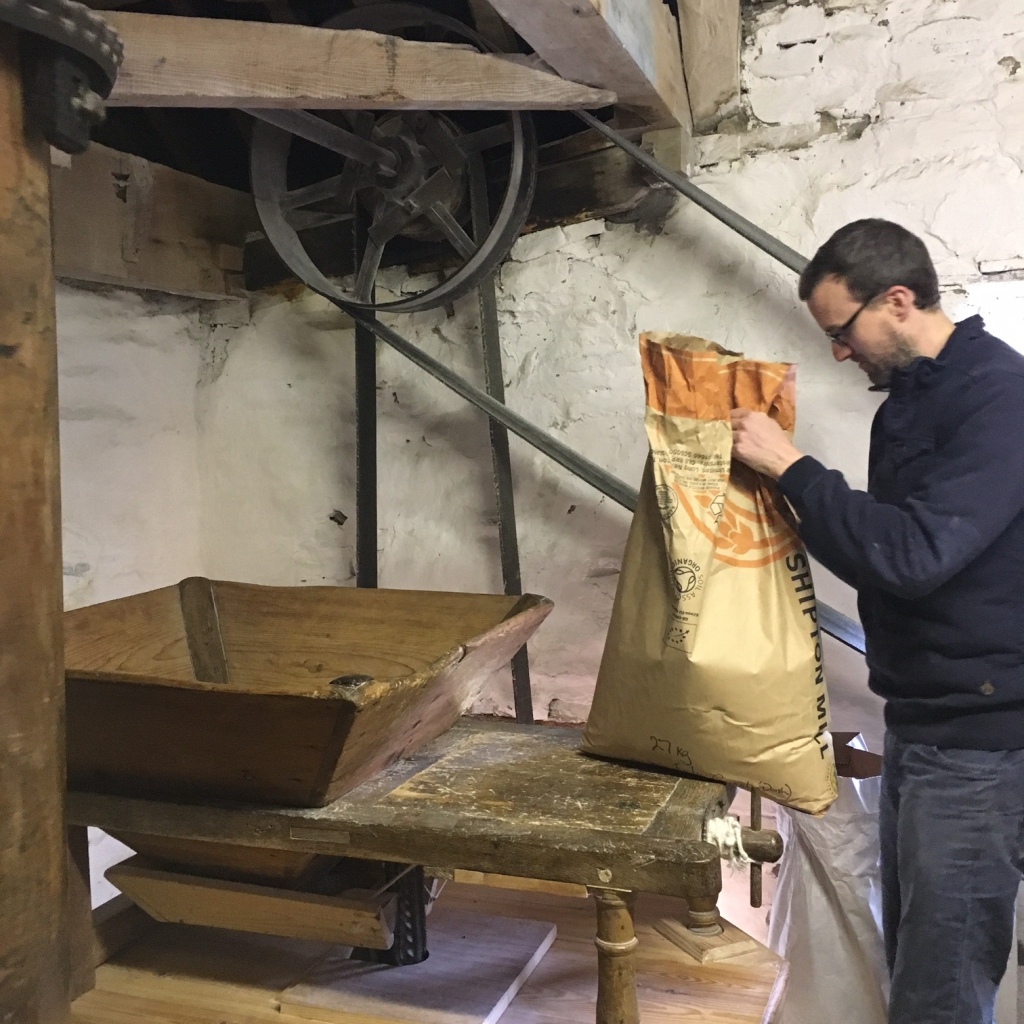 In late summer we reach harvest time. With the crop standing tall it is time for the combine to come in. The combine cuts the crop (now growing shoulder high in places) low to the ground and threshes it. Inside the machine the ear of the grain is bashed around and shaken so that the grains are separated from the stalks. The stalks pass out the back to be later baled as straw and used by the sheep as bedding in the winter and during lambing. The grain now needs to head out for further cleaning and drying.

Before we mill the grain it must be cleaned. The combine is a process that lacks a certain degree of finesse. It is rough and ready. So in addition we must give it a good clean. Our friendly Heath Robinson type neighbour and mentor, Andrew Broad, was on hand to guide us through the process.

Once cleaned and subject to further drying in the warehouse over the weekend with fans blowing over it, the grain headed to Felin Ganol in Llanrhystud for milling. We milled the rye in winter 2016 and tried a sample batch of 25 kilos. I desperately want to say it was fantastic when it came to baking. But alas it would be a lie. The honest answer is … it was okay. The bread looked good, tasted good … but it was not particularly interesting. It was not the reflection of the terroir that I had hoped. I have some ideas as to why this is so …. But I’m not ready to share yet and as of yet, Llangeitho grain has not found its way into Lampeter Bakehouse bread. So roll on harvest 2017. 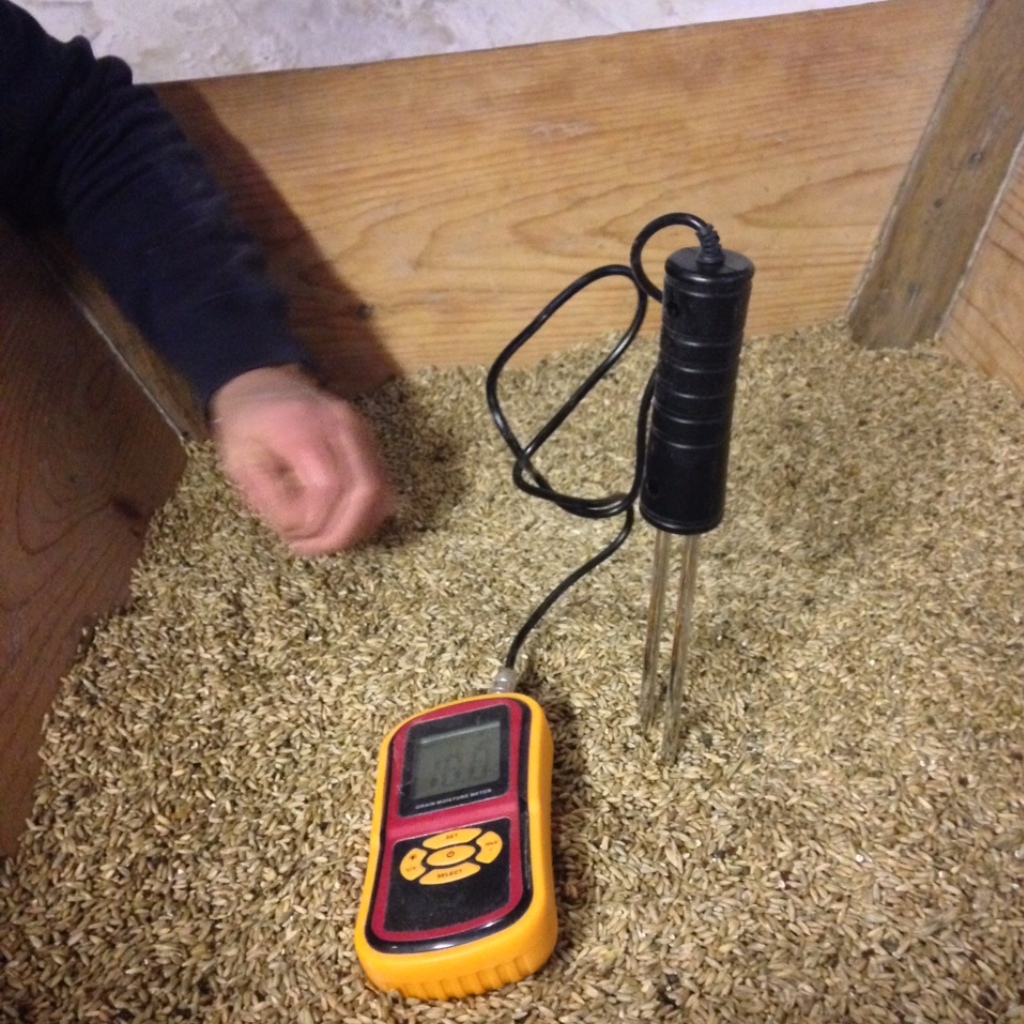 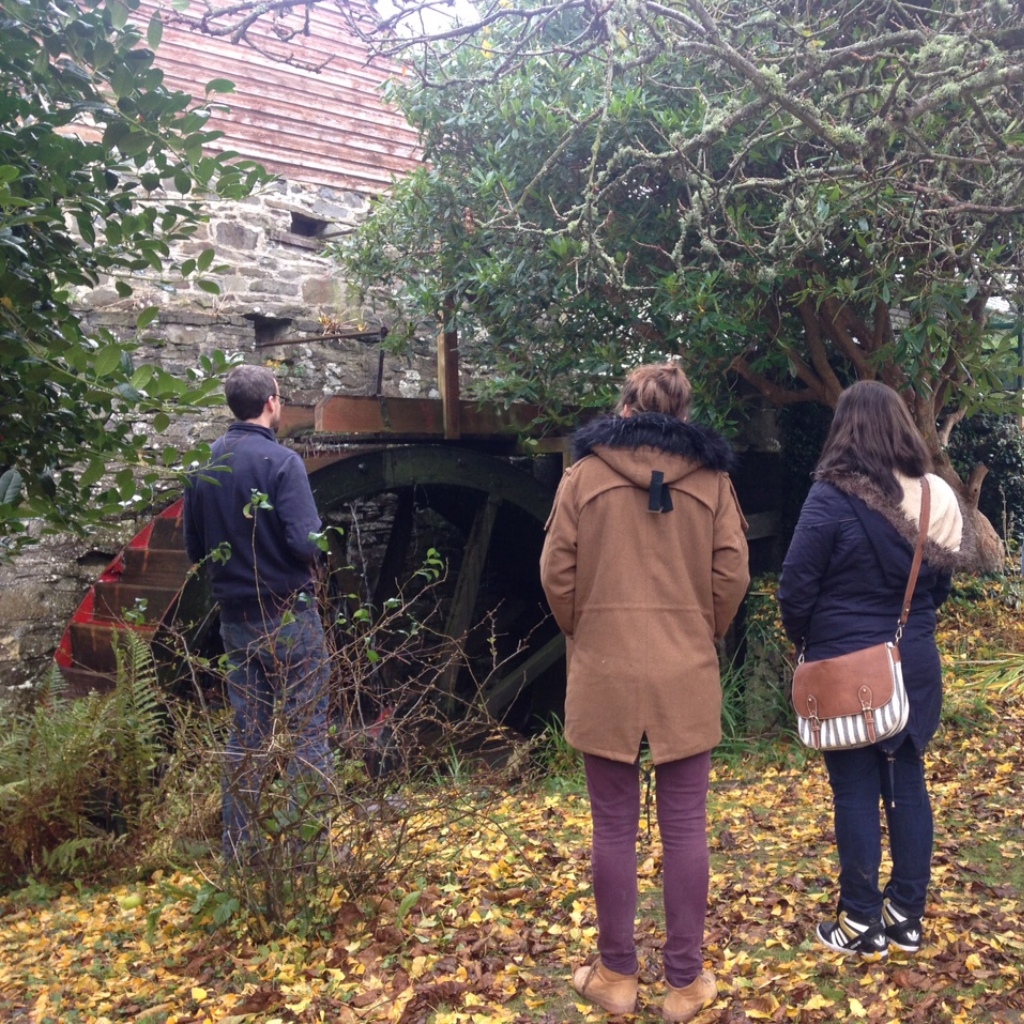 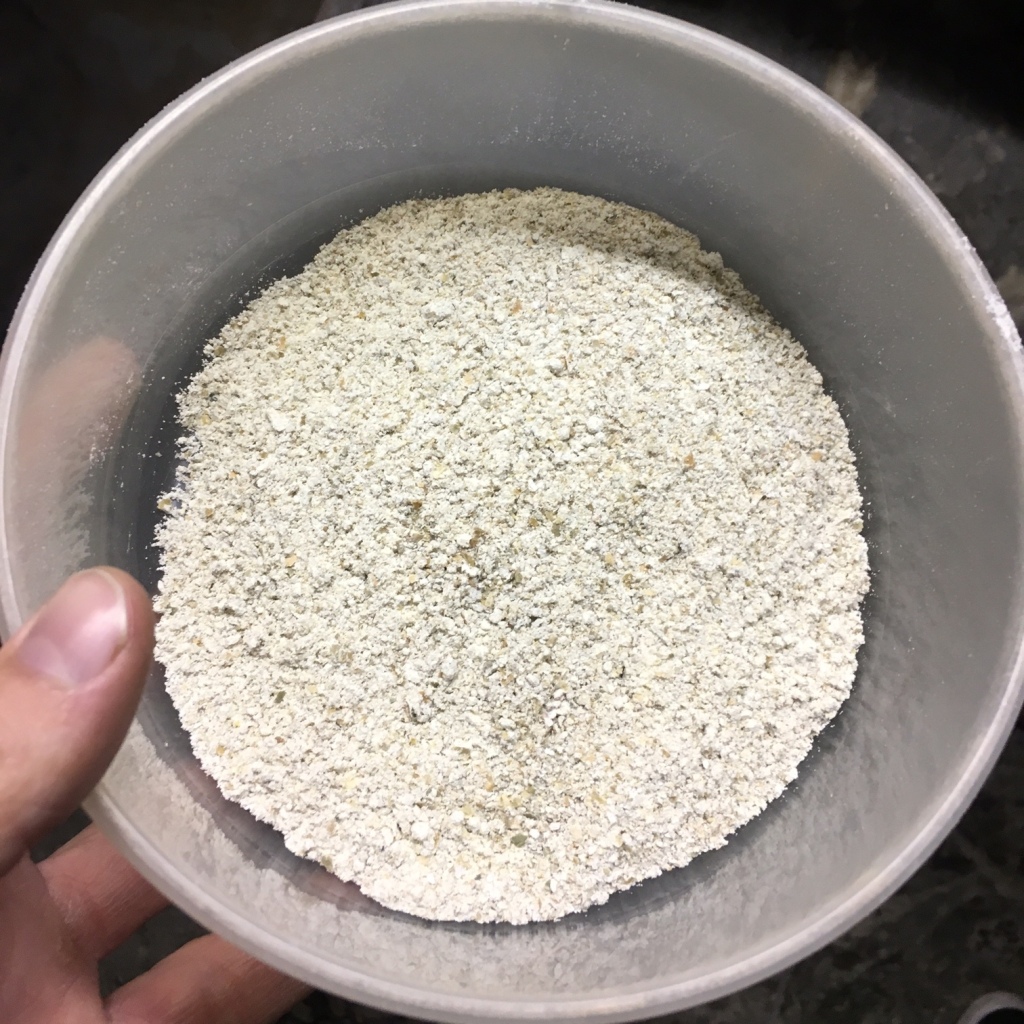